Go trough the whole pipeline and understand all the processes of a 3D clothing production.

Please choose the course option and payment method, fill in all the fields of the form and click "Register".

Please enter authentic data only, as it will be verified before account confirmation.

To complete registration please check your email and follow the instructions.

You can check the course status and make a payment, if needed, on the "Subscriptions" page.

Please check the accuracy of entered data and email address.

Please reload the page and try to register once again.

You already subscribed for that course.

During this course we will go trough all the processes of 3D clothing production. We will learn how to create a 3D leather jacket from a 2D sewing pattern, we will get into the thought process of a clothing designer when working with Marvelous Designer, we will understand what makes a piece of clothing fit, while exploring anatomy of clothing.

Thinking as a fashion designer we will understand how to create 2D patterns and bring them to life and make them fit our character and look as realistic as possible. Making clothing fit the body of the character has it's own techniques that we need to grasp.

During this course we will look at some reference materials of actual sewing patterns that fashion designers use when creating the clothing, and how to use them to start your basic shapes for your 3d clothing project.

With more and more people entering the field every year, how do you stand out? Thomas Jefferson said, "I'm a great believer in luck and I find the harder I work, the more I have of it." In this course I'll go over modeling in a production pipeline and go over some common characteristics of successful artists that I've noticed in my experience that make them succeed and continue to thrive.

We will explore the material properties and how a couple of simple tweaks to the materials Weft and Warp can make a huge difference on how the piece of 3D clothing looks on your 3D character.

As clothing designers we have to think of Marvelous Designer not just as a cloth simulation software it’s actually a 3D modelling software. I will even show you how to use Marvelous Designer to create objects other than clothing.

We will show how you can take the 2D patterns that we created in Marvelous Designer and export them as 3D clothing models into ZBrush and start adding those final but crucial touches to making our 3D models as realistic as possible.

At the end of this course you will get a grip on how to control Marvelous Designer to create some amazing and realistic 3d clothing models by thinking as a clothing designer and hopefully make you fall in love with Marvelous Designer that will def become an important 3D tool in your arsenal.

Price for Independent Studies:
2 monthly payments for the course $199 USD each
or 1 full course payment $398 USD 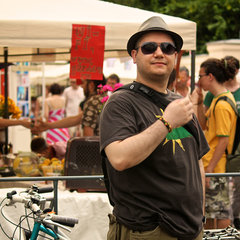 I have a been a web and graphic designer for the past 7 years, during which I worked in different areas in digital and web design and I’m not sure I can say which area I love the most yet, but maybe one day I’ll find out.

I studied Modern and Oriental literature for almost 3 years but I dropped out when I found out it wasn’t my calling.

I can’t say that I have a particular style, as a freelance web and graphic designer it’s not a great idea to have a fixed or set in stone style cause our job is create different type of websites and graphics.

I love Learning new stuff all time, exploring new styles and new software, it just keeps your mind active. Cause when you are learning a new software or a technique you will learn how to create a new effect, style, shape, code, etc, it will fuel a new dormant idea, or a concept you had forgotten about in a drawer but you didn’t know how to do it back then, this is why I never throw any of my sketched no matter how messy or stupid they might seem at the moment I drawn them.

In my free time (which is more and more becoming an endangered specie) I love playing video games to relax and it’s a fantastic source of inspiration.

When I go out (which is rare … kidding) I like to take photos and observe light color shapes anything that inspires me, cause you never know where inspiration is hiding.

The best way to learn what this course is about and get an insight into it!

What are the main purposes of the course? What the course is about? Learn what software you are going to use during the course.

Modeling patterns for a jacket

By means of reference we are going through 3D Clothing workflow together.

All that you need!

Content developed by professionals, challenging assignments and mentor's assistance is your way to success!

8 online meetings with your mentor and video reviews of your work!

More than 10 hours of video lectures and tutorials!

More than 30+ recordings of QnA sessions and video reviews available!

At enrollment to this course you can choose one of two payment options: mentored studies or independent studies (without mentor's assistance). Comparison of these two options is provided below.

Attention! This course is provided at a reduced price meaning independent studies without mentor's assistance, no online meetings or video reviews of your assignments. However, recordings of QnA’s and video reviews of previous groups will be available for your reference.

Overview and Comparison of Mentored and Independent Study Courses

Get the grasp of amazing stuff that is waiting for you!

Where do our students work?

Many of our students got employed in world famous studios working on top level projects. Below you can find some of them:

"Effective educational system allows you to study at any time and anywhere in the world and get both great knowledge and practical skills."

CGTarian brings you one of the best industry's knowledge since 2010.